Although lever-action rifles were introduced back in the 1840s, the surviving originals aren’t terribly different from the ones we use today – including the Marlin 336W, which we (and Sootch00) will be discussing today.

Marlin Firearms was founded around 1870, and their production of the lever-action gave Winchester direct competition. After many years, Marlin 336W took the lead because they could offer a solid scope mount on the top of the receiver because they designed their rifles to eject from the side. As shooters began using optics more and more, this became more of an advantage because it’s easy to mount a scope mount on top of the receiver.

The Winchester lever actions eject from the top, so it’s more challenging to mount a scope on them, giving the Marlin 336W the edge in this department.

Lever actions are wildly popular with hunters, especially in the Northeast where I live. In Pennsylvania, I sometimes joke that the lever-action is a “standard issue” with hunters. It seems like everyone has one. Bolt actions are also popular, but more old-timers seem to like the lever guns quite a little bit. The most popular caliber in my experience has been the .30-30, though .35 caliber and .444 are sometimes seen. Ballistics of the .30-30 are similar to the Russian 7.62x39mm caliber.

A 150-grain projectile moves out at around 2,390 Feet Per Second and a 170 grain round goes about 2,230 FPS, and can be used to take anything from deer to bear, as well as other game. The reasonable range for this rifle is about 200 yards, maybe a bit more, and for deer hunting in wooded areas, this is really about all you’d need. It will harvest game efficiently and cheaply. I know guys who take theirs out a week before hunting season, fire one or two rounds to verify their zero, and then bring home a deer every year, and a box of rounds lasts them for years.

The Marlin 336W: Other Details

Another nice aspect about the .30-30 is that ammo is sold anywhere that you’re likely to find ammunition being sold. And there is a plethora of ammo styles, sizes, and weights for this caliber, most of which are geared toward hunting. Much of it is soft point with a flat point. The tube magazine prohibits pointed bullets because they can set off other rounds that are in the magazine. Hornady does make a pointed round that uses a Polymer tip that can be fed through the tube magazine and it exhibits better ballistics because of the shape of the bullet. Bullet weights range from 110 grains up to 170 grains.

Aside from rifle calibers, they can also be had in pistol calibers, such as .357 Magnum and .44 Magnum.

The lever action is so common that they are not very expensive, and can usually be found used on the racks of gunshops for a couple of hundred dollars, making them a super value.

The Marlin 336W that Sootch used for his review is actually an 1895 design (with this particular model first being introduced in 1946) and it has been wildly popular. The 336 has a Walnut stock, whereas other models of the 336 have used different woods (Birch, for instance).

Different parts of the Rifle.

Over the years, I’ve had a few Marlin 336W’s and all have proven to be 100% reliable. One that I had mounted a scope on was startlingly accurate, giving Minute of Angle groups at 100 yards with regular hunting ammo. Sootch reports that the rifle he tested gave two inch groups at 100 yards, which is not bad at all.

The 336 has a tubular magazine that holds six rounds. Obviously, the action is of the lever variety, which is very fast to work when firing. They’re not great to work from the prone position, though. The barrel is 20 inches (there is also a 24 inch model as well as a 16 inch model).

Aside from the hunting aspect, this platform has relevance for defensive use in states that restrict semi-autos. No, it’s not a super-high-capacity semi, but it will absolutely repel boarders when defending the old homestead. They fire serious calibers that will make bad guys go away. A nice aspect is that if you have to use one defensively, it’s just a “cowboy gun,” i.e., a good old American firearm that almost everyone is used to seeing. In court, the lever action is going to look far more tame than a prosecutor holding up and AR or AK with a long, curved magazine. If I had to defend my home with a lever gun, I could make it work. No, it’s not my very first choice for home defense, but you could do far worse. As far as not raising alarm with the public when seen, it rates extremely highly.

The Rifle in Use

The rifle is short enough to be able to maneuver it around well enough, even in close quarters, another factor that makes it suitable for defense and hunting. It is light, slim, and fast to the shoulder. The recoil is not light, but certainly not prohibitive, allowing fast follow-up shots.

Sootch reports that the side loading gate was very stiff when the rifle was new, but after a couple hundred rounds of use, it loosened up. This has also been my experience with these rifles. Over time, the action wears in very nicely, and everything seems to get slicker and smoother over time. Like a fine wine, it just gets better with age. One nice aspect of the tube magazine and loading gate is that you can top up the magazine as you use rounds. Although it’s not “high capacity” by today’s standards, being able to add rounds as you fire them can be an advantage. You can’t do that with a box magazine.

Marlin 336W: the Trigger and Mag

This leads me to another point: you don’t need to invest in box magazines for the lever action, which cuts down on the investment. There are no magazines to misplace, lose, or damage. The tube is very durable, and I’ve never heard of one being damaged.

There is a cross bolt safety that blocks the hammer, so it is quite safe. You can drop the hammer and the safety prevents the hammer from hitting the firing pin.

According to Sootch, the trigger pull on his rifle was very crisp and felt great. I will echo that sentiment for every Marlin 336W lever action I’ve ever owned or used. Their triggers are
universally among the best of any rifles I’ve ever used. Not terribly heavy and crisp. This undoubtedly contributes to accuracy.

The iron sights are basic; the rear is a folding buckhorn, with the front being a hooded sight. The front sight blade has a brass bead embedded in it to aid in visibility. They’re entirely adequate for the rifle, although my personal preference is for aperture (peep) style sights. Still, these will do the job nicely for most people. With my aging eyes, though, buckhorn sights aren’t the best.

Sling swivel mounts are found on the front barrel band and at the buttstock, so mounting a sling is a snap. There is also a plastic butt plate, which is adequate for the moderate recoil of the .30-30. Weight of the lever gun is around seven pounds.

This video offers a good, honest overview of the good and bad points of the Marlin 336W lever action rifle. Given my experiences with these rifles, I believe the information herein is very accurate and well presented. Sootch offers a concise and interesting narrative. The Marlin lever action offers a very good value, and you’ll be getting a solid performer for your money. As can be seen above, the advantages far outweigh the disadvantages. 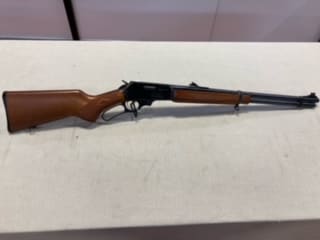 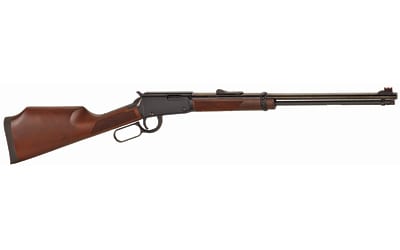